July 1st marked the 30th birthday of my husband’s cousin, Adam.  Adam’s wife, Kate, planned a party at their house to celebrate his birthday as well as the 4th of July.  My hubby, B, and I really wished we could be there.  But this party was different than most.  The guest of honor for this party was not there although I am positive he was there in spirit.  Cancer took Adam from those who loved him, including a son he would never meet, on March 27.

Adam was the son of my MIL’s cousin.  So he and B weren’t even first cousins.  But they were almost as close as brothers.  B, Adam and his brother Dave spent a lot of time together as kids.  There is quite a large gap in age between B and his brothers and that gap was filled by Adam and Dave.  The families even traveled together.  When I met Adam, I instantly liked him.  Adam was smart, artistic and VERY funny.  I can’t think of one time that I was with him where I didn’t laugh for at least 5 minutes at something he said.  He did a dead on impression of Old Man Herbert from “Family Guy” and that character will always remind me of him.

When Adam met Kate, I liked her instantly too.  She was like me…sarcastic and quick to joke.  She and Adam seemed a perfect fit.  Adam was diganosed with cancer not long after they met 4 or 5 years ago (I could be a bit off there).  Lots of women would have run in the other direction but not Kate.  She was there with him every step of the way.

When Adam was diagnosed, he had a tumor removed and then underwent almost a year of chemo.  After that he was given a clean bill of health.  But that was short lived.  The cancer came back and this time, it was here to stay.

The last time I saw Adam was June 30, 2009.  He and Kate took a trip to Disney World.  My daughter L’s 5th brithday fell in the middle of their trip so we took advantage of the Free Birthday promotion and took the kids on the first visit to Magic Kingdom.  We had a great time even though it rained.  We rode the rides and watched the parades and just had a wonderful day.  Adam looked great and in a way, I am grateful that I am able to remember him that way.  Here is a picture of Adam and Kate taken that day: 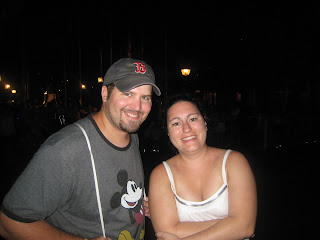 Kate and Adam returned to CT but we continued to keep in touch through Facebook.  Adam had his ups and downs but at that point, the good days seemd to outnumber the bad.  On Christmas Eve day of that same year, I got a text from Kate telling me that she and Adam had gotten engaged.  We were beyond thrilled for them and we felt honored to be the first of the extended family to know.  They started planning the wedding and settled on April 2010.  Kate called me to let me know the date just in case we could make it but it just wasn’t possible.  I heard it was a beautiful, fun wedding even though it was bittesweet.  Beyond the happiness, we all knew that Adam was on borrowed time.
But Adam continued to rally.  He and Kate were able to take a honeymoon to Aruba.  That fall, they announced they were expecting a baby the following May.  Adam was BEYOND excited to be a father.  He and Kate found out they were having a boy and life seemed good.  But soon, the bad days began to outnumber the good.
When my IL’s were visiting us that March, they let us know that things were not going well.  Adam was unable to receive some of his treatments due to his inability to breathe when he was lying flat on his back (the tumors were in his lungs and there was fluid build-up).  Later in the month, we learned that he had been admitted to the hospital.  I caught up with Kate on Facebook and she said he was doing better and they were going to try to wean him off the ventilator and that she hoped he would be home by that weekend or shortly after.  That very weekend, my BIL, Jeff, called.  My heart sank when I saw the Caller ID.  Jeff RARELY calls and I knew it was about Adam.
Jeff told me that Dave had called my MIL and told her things were not good and that Adam’s time would likely come soon.  As usual, Dave was vague.  With the exception of Kate, Adam’s immediate family had been in denial throughout his whole illness so this was typical.  I went and told B the news and then I sent Kate a text to tell her I was thinking of her.  She responded with her thanks.
Not too long after that, I received another text from Kate.  She told me they would be taking Adam off life support soon. She apologized for telling me that way but she knew Adam’s parents probably weren’t keeping people informed.  When I called my MIL to let her know, I found out Kate was right.  They were pretty much in the dark.  I told them I would keep them updated.
A few hours later I received the worst text I have ever received.  Kate told me that Adam was gone.  He passed away with her by his side.  Adam’s long battle was over.  I went and told B and I could tell he was in a bit of shock.  Then I made the difficult call to my IL’s since I had a feeling they didn’t know yet and I was right.  See, my IL’s had a very special relationship with Adam and Kate.  Kate and Adam had bought a hosue in Kate’s hometown which is also B’s hometowm so my IL’s lived close by.  They visited with them often and often went out ot dinner or to the casino together.  I knew this was going to be VERY hard on them.  I hated making that call.
Next, I had to tell L.  We had lost one of our cats to cancer so she knew what it was but this was the first time she lost someone that close to her.  It was heartbrreaking to watch her eyes fill with tears.  She went and found a Tinkerbell keychain that Adam and Kate has bought her for her birthday on that Disney trip and I told her she could keep it to always remember Adam by.  She still has that keychain by her bed.
That night, B broke down as we were reminiscing about Adam and I joined him.  It just wasn’t fair.  Adam was so young.  He didn’t live to see his first anniversary or his son being born.  But I knew one thing for sure…Adam KNEW Kate was strong enough to handle it.  I know in my heart of hearts that he would not have let go if he thought she couldn’t handle it.  She had been his rock.  She stood by him, married him and carried his child all the while knowing what could happen.  Not many women can do that.  And I admire her greatly for it.
Adam’s son, Luke, was born on Mother’s Day, exactly a week before his due date.  I am sure Adam had a hand in that…his last gift to his wife…the perfect Mother’s Day present.  And Luke is the spitting image of his dad.  Adam will live on through his son but there will always be a hole in our lives left by him.  Even so, all of us whose lives were touched by him were blessed.
I had hoped that cancer would not hit this close to home for quite some time but that was not to be.  We recently found out that the teacher Linnaea had this past year has been diagnosed with Stage 4 breast cancer.  She’s my age.  Like Adam she has the right attitude and plans to fight.   But it still sucks.  We need to find a cure.  But until then, as Aunt Becky says, “Cancer is bullshit.”

Another study I read about at All Women Stalk. the patient took a treatment alone Tetrahydrocannabinol (THC) which May the Reduce Anxiety, pain and tension symptoms related to cancer. CBD may also benefit people with other forms of anxiety, such as social anxiety disorder (SAD) and post-traumatic stress disorder (PTSD). It may help treat anxiety-induced insomnia as well. In 2011, a study researched CBD’s effects on people with SAD.

One Response to Cancer Is Bullshit