I can’t believe that it’s almost the middle of July already!  We really enjoyed our beach vacation.  To see this every night was just heaven: 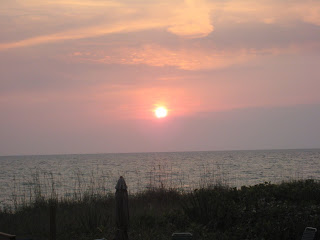 Hubby got some stuff done with the house.  The house is now painted but awaiting a second coat.  He also painted the pool deck though he has a couple more things to finish up there too.  WE have tons of landscaping to take care of but that’s coming along slowly too.

My IL’s were here for a week and that was a nice visit.  They were here for L’s actual birthday.  We took her out to dinner and then the night before they left, we all went to the Spirit of Aloha Luau at the Polynesian resort in Disney World.  Man, I LOVE that dinner show!  L loved her new TV/DVD combo from all her grandparents as well as all her gifts from us.  I can’t believe my first baby is 7!

Hubby started a new job on Monday.  Well, technically it started on July 1 but he was off work to visit with his parents and then as soon as his parents left, he had to go to Minneapolis to meet his new boss and go over some things.  So, yesterday was the first day he was actually at work in the new job.  The good news is he’ll be able to work from home most of the time.  He hopes to start that later this week.